Bangladesh, a country where the government violating human rights violently 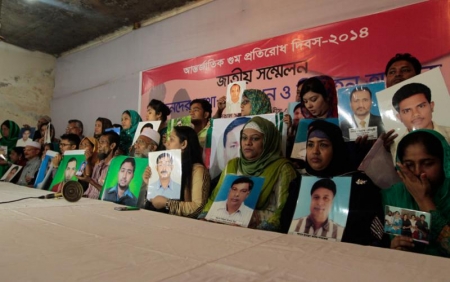 Few days ago, two young men were shot by Police at their leg and were heavily injured. It seems like they might be invalid with their injured leg for the rest of their life.

One year ago, 7 activists of Bangladesh Nationalist Party (BNP) were abducted and they haven’t come back even after one year of the incident. It had been reported that some people in the name of RAB (Rapid action Battalion) took them away.

These are the common scenario now a day in Bangladesh.

Bangladesh, the land that pursued democracy about two eras ago, is now under a very rigid and belligerent government. Human right violations by civilians or non-government people is not uncommon; but, in Bangladesh, most of the violations of human rights are occurred by the governmental organizations among whom the law enforcing force like Police and RAB are main   accused for the contamination to human rights.

Especially, after one sided election of January 5, 2014, where not more than 30% of all the political parities contested, Awami League became totally headstrong and reckless in occupying power somehow. In this purpose, they are using the law-enforcing authorities of the state to undermine and inactivate the people and organization who are against them.

In many occasions, the Dhaka Metropolitan Police is not giving permission for any legal demonstration; even though they give such permission, they ban use of loudspeaker and hand-speaker at the occasions. Needless to say, the police authority is just doing what the government is ordering them to do.

The so called elite force, contrary to its name Rapid Action Battalion (RAB), actually has become 'Rapid Action Butchers'. It was formed in the regime of past BNP led government and was severely accused of ‘crossfire’, the killing of criminals without any trial.

In the regime of current Awami League government, the severity of crossfire minimized neither, however the name of RAB has been attached to one great crime— enforced disappearance, termed ‘Goom’ in Bengali, where they are involved in kidnapping some people and leaving no trace of their abduction deeds.

In crossfire, generally, the notorious criminals are being shot dead. Nonetheless, even the innocent people were the victim of ‘abduction by RAB’. This matter is attested by the recent infamous ‘Seven Murder’ of Narayanganj, where seven people including local Awami League Leader Nazrul Islam and Advocate Chandan Sen were kidnapped and killed by RAB people. Lt Col Tarek Sayeed Mohammad, Maj Arif Hossain, Lt Commander MM Rana and a few other high officials of RAB was involved in the murder as they did it by exchange of millions of TK. Its all are revealed by the recent investigation after arresting those accused RAB men.

Hence, its not a matter of wonder that many of them are also involve in kidnapping, killing and Disappearance of people by exchange of money or other benefits. Besides RAB, other law enforcing agencies of government are also suspected of accomplishing enforced disappearance. However, people think the carelessness as well as backing of ruling party is the main reason for such offenses. As the government has been using RAB for their own interest for a long time, some of the RAB men are thinking themselves beyond the law. They think they will get the protection from government despite their evil deeds.

In addition, government has created ‘ICT Act 2013’, a very much controversial law, which is regarded as a big obstacle against freedom expression. Especially, it’s a big blow to the progressive online activists of the country who talk against any religious or administrative mishaps.

It’s really baleful that both the boys didn’t get bail and they are still in prison, even after one year of their arrest. Nevertheless, the conscious citizen of the country thinks that the petition against two boys is really false and it was done by some local fundamentalists of Chittagong, just because of prior enmity.

It’s not an ending story guys, as the government also enacted rigid ‘Telecasting Policy’ which, needless to say, according to the civil society, is to weaken the voice of the opposition people.

Hence, Bangladesh, right now, is very much a country where the government is the main obstacle behind the sound practice of human rights. The state itself is violating the human rights violently. In these circumstances, only the restoration of democracy and legal ruling is essential for Bangladesh, in addition to the non-involvement of ruling party to the law-enforcing agencies. Abolition or re-creation of RAB can be a good solution here.