Disgusting myth of the Hefazat burning the Quran: The Lies

A recent item in the news was the burning of the Quran at the South gate of Baitul Mokarram at Dhaka in Bangladesh. This was covered widely by various media outlets. In addition to the various television media such as Shomoy TV, Ekattor TV, BTV, GTV, ETV and others who broadcast heart rendering video and pictures on the incident, print and electronic media were vociferous in denouncing the incident as well. I would like to explicitly state the fact that the television media showing the above news does not include television channels Diganta TV and Islamic TV. This is because they were closed down without prior notice at 4 am Bangladesh Standard Time in the wee hours of the 6th of May 2013 in order to prevent them from broadcasting any news on the massacre which occurred at the hands of security forces after 2:30 am at Shapla Chattar at Motijheel (a.k.a Shaheed Chattar). The two channels are still shut down without any explanation from the government, which has given flimsy statements suggesting that the measure is only 'temporary'.

The Daily Star in this context has reported the following,
" Another lie is widely being circulated over burning of the holy Quran by Hefajat activists during the Sunday evening violence in and around the Baitul Mukarram area. While the book shop owners went on record on television saying that the Hefajat activists had set fire to their book shops, conspiracy theorists are insisting that it was the work of Awami League activists. After all, Hefajat activists went there demanding the death of those who had insulted Islam. They couldn’t possibly have burnt the holy Quran, could they? The shopkeepers who lost everything say they did."


As a backup the Daily Star has written a post violence report where it attends to your emotional taste buds by publishing industry standard heart rendering stories of shopkeepers lamenting their loss. The bit of misinformation is inserted when it says, "Traders on the pavements around Baitul Mukarram mosque said around 50 bookshops there sold the Holy Qur’an, Hadith and other Islamic books. Some 10 shops somehow survived Hefajat’s rampage, while the rest were burnt to ashes. They said several hundred copies of the Holy Qur’an were inside the stalls torched by Hefajat men."
How was the daily Star so sure that Hefazat was behind the burning of the Quran? Why has it stated this as a fact without evidence? Is a flimsy testimony enough?
I was there at Baitul Mokarram on that fateful Day. Before I go on to that incident, this is a picture that I would like to share. 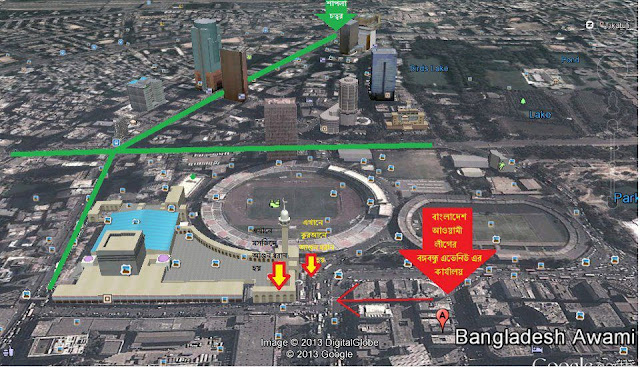 The yellow arrows outlined in red are the places where the copies of the Quran were burnt (Baitul Mukarram South Gate) as per the information given by the various media. The huge red arrow underlines the area where the Awami League office at Bangabandhu Avenue is situated. Their presence in the surrounding areas were strong, including at the South gate of Baitul Mokarram. There is no dearth of information regarding the presence of Awami League on the street on that day. They even beat to death a Hefazat member on that day and pictures of their attacks are widely available on various sites. Here are two pictures I would like to share which occured beside Baitul Mokarram South Gate (which can be seen in the distance in the second picture). 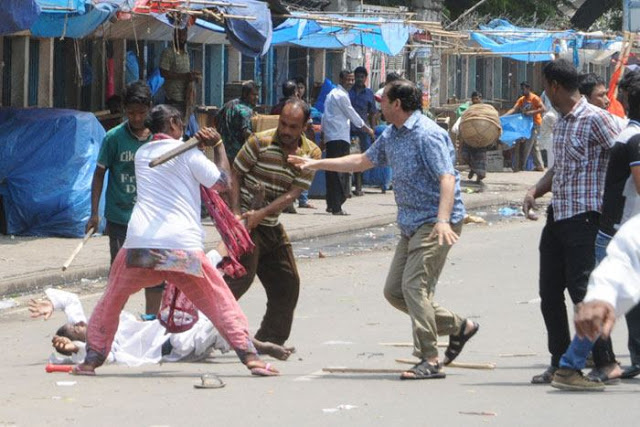 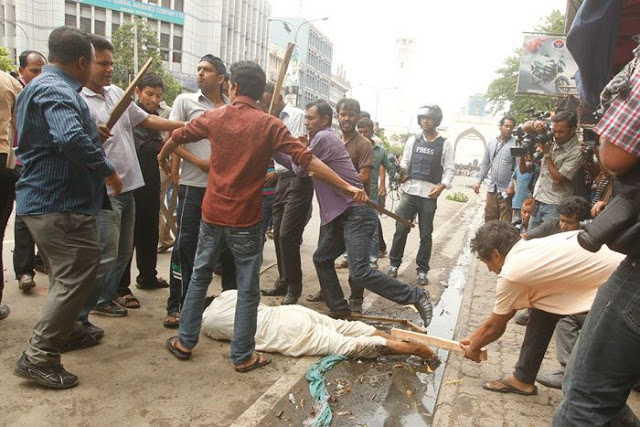 On a more personal note, I personally witnessed the fact that no Hefazat members were allowed to stand at the South Gate of Baitul Mukarram. Clashes occurred because some of the Hefazat members were attacked by the Awami League as shown above. Also can be seen at the second picture in the distance is the presence of many people in the distance. Who are they? Awami League or Hefazat?
Let us have a closer look at a video (embedded in my original post). It gives a view of clashes that were occurring at about 1600 pm at the South Gate of Baitul Mukarram. Awami League Cadres are clearly visible on the street which houses the hawker market where the copies of the Quran were burned. The Hefazat members are in the coutyard and are trying to go to the other side of the Gate. Some were trying to escape and flee the indiscriminate police firing police at the North Gate, others were trying to help their brothers who were stranded in Gulistan, while others were simply trying to push back the Awami League.  For a better view here are still shots from the short video. 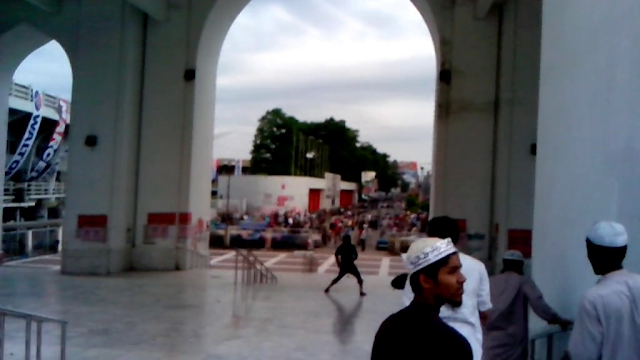 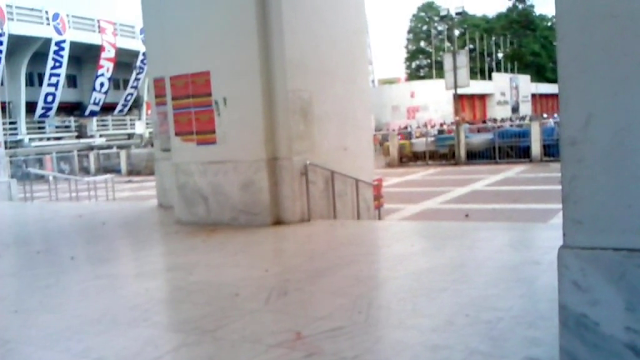 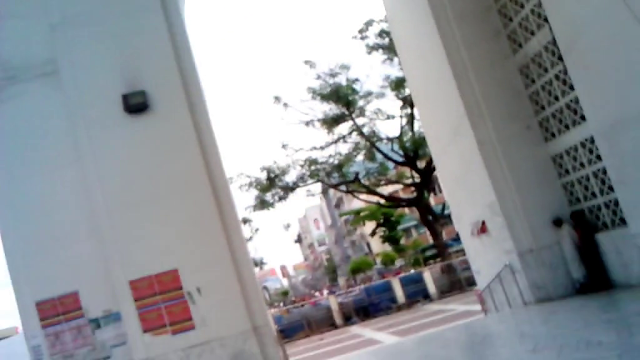 These shots make it crystal clear about who was where at about 1600 hrs pm. The cadres of the Awami League were about 100-200 and they were very calculative in the fact that they did not allow any Hefazat members to exit from that direction. So did we take their position or remove the Awami League from that place? Unfortunately, no. A few minutes later, a platoon of police came and shot teargas inside the Baitul Mokarram South Courtyard. That was the end of our little adventure and we forced to retreat to the inner reaches of the mosque at sometime after 4 pm.

Teargas inside baitul mukarram. Acrid smell. Police have entered with AL. We are escaping.
— Hussein M Talukdar (@TalukderShaheb) May 5, 2013

Later, as I took a round of the place while going home from the Gulistan End, I saw at least 70-100 riot police guarding the South gate and the Awami League members standing in front of them. So, if the Hefazat members were not able to take possession of the South Gate in broad daylight when the their numbers were the highest, were they ever able to stand there at night, when police presence was increased many times? Why did the Hefazat have to stay put until night to put fire to the market at the South Gate and the Bangababdhu Stadium? How logical are the claims of seculib media such as the Daily Star which have run a free commentary blaming Hefazat, Jamaat and BNP at a Banglalink rate inspite of the presence of strong evidence to the contrary? Why did the media not widely cover such attacks by the Awami League and why were they literally absent when the 'carnage' was supposed to have occurred, despite their heavy presence at Motijheel and Paltan? When there are too many coincidences, they have only one word for it. Truth.
Truth is that AL General Secretary Syed Ashraful Islam issued the ultimate threat. According to a report,"The Awami League (AL) on Sunday warned the Hefazat-e-Islami, which has been staging a rally in Motijheel since afternoon, that its activists must leave the capital by evening or face severe consequences."
Truth is that Awami League was involved in the arson at the market beside Baitul Mokarram South Gate, the Bangabandhu Stadium (which is clearly visible in the above pictures) and the jewellery market to the west side of the Baitul Mukarram.
This may be a small part of the incidents which had occurred on that fateful day, but it provides a glimpse as to the level of planning that was executed in tripping and cornering the Hefazat in the buildup to the horrifying massacre at Motijheel in the wee hours of the 6th of May.
And Allah knows best.
23724 views 1 comments