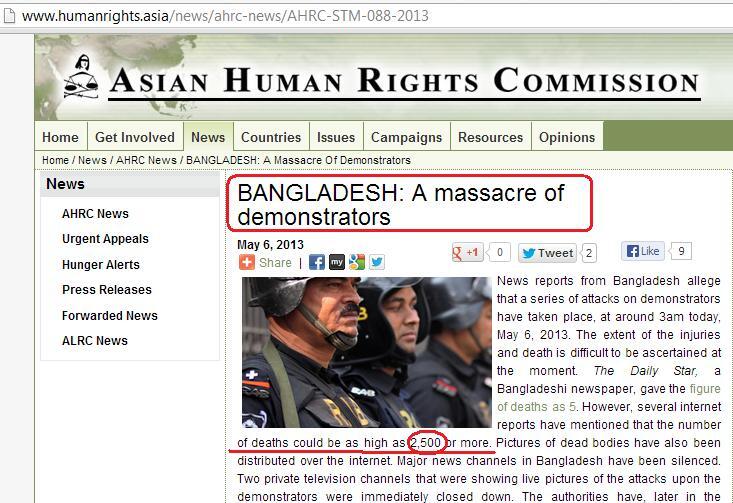 I have heard of brutality and despotism in various parts of the world but Hasina, the current Prime Ministers of Bangladesh has broken all records. Hasina and her government have committed colossal genocide on Bangladeshi people yesterday. They have massacred countless men in the depth of the night.

Hefazote Islam and its supporters gathered in Dhaka city with the aim of putting extra pressure on the government to end its brutality, human rights abuse, political abduction, extrajudicial execution, aiding and abetting the shahbag secular fundamentalists and thug rule. In response the government gave an ultimatum to the protestors to leave the city by dusk or the government will resort to its tried and tested method of clearing the city.

I have heard of evil dictators attacking their own people but Hasina, an elected parliamentarian and the Prime Minister of one of the most populous Muslim nation in the world has stooped so low that even the evil dictators appear angelic. She massacred her own people while they slept. The protestors gathered in a square as the night fell and began to rest. Some asleep, some engaged in chit chat and some in personal prayers. At around 2.30am, while the protestors were resting and in the depth of the darkness that deepened over the city due to the government turning off the electricity from the entire area, the security forces moved in. What followed is a cold blooded massacre of the protestors. In the darkness all that could be heard are tanks rolling, machine guns firing and people’s last harrowing cry as the bullet pierced their bodies, leaving them dead of injured.

I have heard of Slobodan Milosevic’s mass murder and mass graves in Bosnia but Hasina has gone one step further. Her security forces have simply vanished the bodies of those they have massacred. No one knows how many people have been shot dead by the security services and nobody knows how many people have been injured either. The media organisations that are trusted by the masses of people have been shut down, the remaining media have been given clear instructions to not report or show dead or injured bodies. There has been a total shut down of press freedom and the world does not have a clue as to what unfolded in the Dhaka city last night. This was by the far the worst ever massacre of Bangladeshi people by any elected government.

The current Awami League led government of Bangladesh is completely responsible for a premeditated and calculated slaughter of hundreds of Bangladeshi people. This government has orchestrated mass murder in the last 18 months at a scale that has not been witnessed in Bangladesh since the murders of thousands of Bangladeshis during the 1971 war. Hasina and her thugs have overtaken the brutality of the Pakistani army; they have unashamedly silenced their opposition by taking their lives.

I have always believed that dictators and despots will eventually be brought to justice, either in this world or in the hereafter. They will be brought to justice one day. Hasina and her cronies will find no holes big enough to hide when their tenor ends. They will find no country safe enough to hide when this parliamentary session expired. They will find no friends strong to defend them when the Bangladeshi people try them for crimes against humanity and genocide of Bangladeshi people.

Let me make myself clear, Hasina and Awami League government are the true criminals and they should be tried in the Hague for mass murder.

A Raw video of Brutality