The politics of demonizing the Hefazat fraternity

I ask, what have they done wrong?
Hefazat-e-Islam is a Qaumi madrasah based organisation of Islamic scholars based in Chittagong. On March 9, it announced a month's protest programmes, including a long march towards Dhaka on April 6, to press home its demand to stop the activities of all anti-Islamic bloggers and to bring them to book for such blasphemous activities. The main demand of the movement, as enshrined in its 13 point demand, is the modification of the currently prevalent blasphemy law to include the death penalty as the highest form of punishment for insults to Islam, Allah and His final prophet.
On April 6, Bangladesh observed one of the largest apolitical gatherings in recent history. Despite a nationwide hartal from 6pm of April 5 to 6pm of April 6 announced by some 27 social, cultural, professional and freedom fighters' organizations and a countrywide 22-hour road-rail-and-waterways blockade from 6 pm Friday to 4 pm Saturday announced by Shahbag, government estimates include the participation of about 200,000 people while unofficial estimates include more than half a million. This was despite the full support of the government in enforcing the above mentioned blockade and strike programs.
The movement issued an ultimatum, warning of laying siege to the capital on May 5, if their 13-point demands are not met by April 30. The 13 points demand can be seen here. A very good friend and fellow blogger, Mr. fugstar, while dissecting the 13 demands, had this to say about them, " I found them much food for thought, and at times problematic, yet these are legitimate demands from a legitimate theological quarter that need to be met with a public dialogue and understanding, not sharpened knives. An ecological (not confrontational) politics of Bangladeshness isn't threatened by them and starts with salam. I suspect these demands will be mischievously portrayed to titillate anti-terror taste buds, but this is real Bangladesh, not an NGO fantasy representation of smiling subaltern suckers." (Wow.....)
The analysis presented thereafter was solidly indicative of one simple point: none of these demands are contradictory, irrational or outlandish with respect to the values which Islam stands for.
Now I ask again, what have they done wrong?
One may ask why I say this. Bear with me and observe the below.
Awami League Joint General Secretary Mahbubul Alam Hanif denounced the demands of Hefazat-e-Islam as medieval. He was speaking at the triennial conference of Tejgaon thana Shechchashebok League at Karwanbazar in the capital Sunday. “The support extended by BNP to Hefazat proves their political bankruptcy. The people of the country will never accept them,” said the AL leader.
“BNP chief Khaleda Zia wants to grab power by killing people. None, including journalists and women, are safe in their hands. The BNP, Jamaat-Shibir and Hefazat are the same force and they are doing movement against Prime Minister Sheikh Hasina,” said Awami League presidium member Mohammad Nasim.The AL leader came down heavily on BNP for expressing its solidarity with Hefazat-e-Islam's programmes. "Leaders of the party of betrayers had been at the podium of Hefajat-e-Islam yesterday (Saturday).They have no ideology. They change colour with the change of time." Mentioning that the country is passing through very difficult time like that of the Liberation War, Nasim said, "If our women don't want to confine themselves to the four walls of the house, there is no alternative to Hasinaism."
Alleging that Hefazat ameer Allama Shafi is surrounded by BNP and Jamaat-Shibir men, Suranjit Sengupta said, “You have given an ultimatum to meet 13-points demand. But, why have you called hartal for today (Monday). Do you know, you are surrounded by BNP-Jamaat men?” Suranjit said the government is ready to discuss with Hefazat leaders but they should keep in mind that Bangladesh would never go back the ideologies of Islamic Republic of Pakistan because the countrymen had rejected them in 1971. He observed that it was unexpected that some Hefazat leaders made derogatory remarks about Prime Minister as Hefazat had placed demands to the Prime Minister Sheikh Hasina.
And the cream of it all are of course the comments of Sheikh Hasina. Prime Minister Sheikh Hasina firmly rejected demands by Islamists for a new anti-blasphemy law to punish those who defame Islam and Prophet Muhammad (pbuh). In a BBC interview, she said existing laws were sufficient to punish anyone who attempted to insult religion.

The verdict:
Snubbed, you say? I say Hefazat-e-Islam was defamed, hated and unjustifiably attacked, all due to its 'audacity' in rising up to demand for the implementation of legitimate Islamic demands in light of the Quran and Sunnah, gaining the stone cold stare of the government in the process. And the big point is, they have done it peacefully, showing total respect for the political system and for the law. The parliament could have debated their demands, and the political leaders could have had constructive discussions with them on this behalf. Sadly neither the political leaders nor the law has shown them the respect. To add to the fray, self righteous 'progressive secularists' have risen up to show support for the movement against the Hefazat-e-Islam and have tried to defame and verbally abuse the congregation through innumerable ways such as blogs, posts, print media, online media and the television media. They have also turned a blind eye to the atrocities carried out by the government against the Hefazat activists, selectively focusing instead on the 'medieval demands', barbaric (Quranic) system of seclusion of women, alleged links to extremists, collaborators of 1971 and what not; the fabrications grow by the minute.The situation grows alarming by the minute as destructive allegations are heaped in the name of constructive and progressive denouncement in the name of everything right.

One day the voice of reason will die out and the atheists in sheep's clothing will only have themselves to blame.
And Allah knows best. 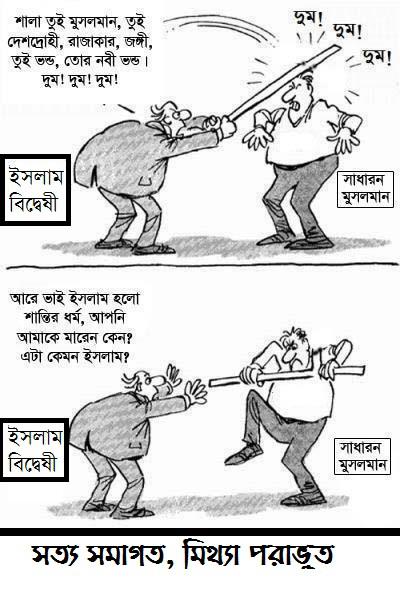