Inu Egging is an act of Democracy

One has heard of the phrase “making a mountain out of a molehill”. Many have tried to modify it in their own various ways and forms to reflect any resultant complexities that might arise while trying to apply the above. In this connection however, Hasanul Haque Inu, the incumbent Minister for (mis)Information of Bangladesh has stood out once again, that too after being egged while attending a talk show in London.
How dangerous is that, one may ask? Blogger fugstar is ready with the answer with a wonderfulblog post, “In the context of UK politics egging is pretty main stream, John Prescott attracts a lot of it, Peter Mandelson got green custard and Fathers4Justice made a purple powder stunt occur in the House of Commons.”
The dramatic nature of his shameless arrogance stood out as he expounded on his inherent mindset on being victimized. Driving on that crazy notion that he stands to be the centre of that little personal space he labels universe, Hasanul Haque Inu spoke in the only uncouth language he knew when he said, “I believe Jamaat, Tetul Hujur (Hefazat leader Ahmed Shafi) and their friend BNP were behind the attack.” Fugstar pointed out that in a recently videotaped talk show, the dishonourable Minister for (mis)Information was at his very best, terming it "an attack on Bangladesh's Democracy (4:45)". 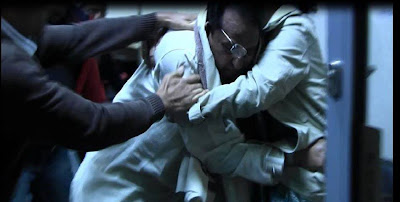 The above is Inu holding tight to a female official at the place of the egging. It shall suffice to say that a dog’s tail can never be straightened. This is not to make Inu small in character or stature, but to showcase the hypocrisy within those words.
The same Inu:
Yes, this is the same Inu who in his stance behind the skirts of democracy, stands accused of some the most repressive actions against the media in recent years. In addition to an already bulging list of closed newspapers and TV stations, the latest in the censorship of the media in Bangladesh includes government duct tape on popular blog portals such as bdtoday, which has issued a statement that details how the government has unlawfully blocked the site in Bangladesh through throttling traffic to and from the website through the private and public internet gateways.
Saying more will not prove that Inu is a badder person than he already is. It is just wasting time.
Joy Baba blessings:
In a blitzkrieg of a move, Sajeeb Wazed Joy, newly instated Johnny Bravo of the nation, had thisto say on his facebook page,
“Yesterday BNP-Jamaat cadres tried to physically attack our Information Minister………blah….blah………. Please vote against the BNP to keep such terrorists out of our country.”
In effect, Joy had established facts already. One was that BNP-Jamaat was “behind the attack” and that it was of a most heinous nature since it was carried out by “terrorists”. If that is the way to describe an egging, what words would one use for police firing live bullets on protesters? Apparently much less, as the same Sajeeb Wazed Joy blamed the Hefazat for standing in the line of police guns and getting in the way of bullets, saying that the death casualty was minimal, as only “6 lives were lost”. Mentionable is the fact that Joy has to date not uttered a word on the unjust verdict of Felani as well. Absurd as that sounds, it may have been because she was not an Awami League member.
I stand amazed at the hypocrisy. You should too.
If shooting innocent protesters and haplessly arresting human rights defenders who report them is democratic, then “these young people who egged Inu probably performed the most democratic act Bangladesh has seen for a while”. When people's mouths get closed by force, its only natural then the hands are bound to react. 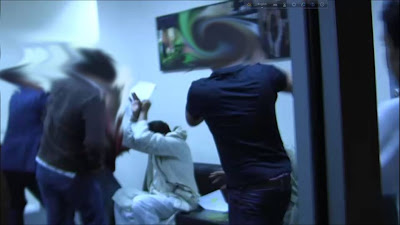