Rasel and Parvez were like any other men, waiting to celebrate Eid with their families, sharing with them their joys and sorrows over this auspicious occasion. They were like you and me, waiting for the Holy month of Ramadan to end, waiting to rejoice, to pray and to go on with their lives.
But what transpired was a different story. It was two days before Eid that they had give their lives. Abdullah Al Rasel Babu (30) and Abu Bakr Parvez (32) were killed in cold blood on Wednesday night at Sitakundu in Chittagong. Apparently their only crime was supporting Jamaat.
Abdullah Al Rasel Babu was en route to the market at Boro Darogahaat to buy Iftar when a cowardly group of 7/8 Chatro League and Jubo League thugs headed by local League leaders Islam and Rony attacked him. Attacking Rasel with sharp weapons, they hacked him mercilessly and cut the tendons of his hands and feet. Already weak from fasting, Rasel died from the deep wounds and injuries inflicted upon him as he was being taken to Chittagong Medical College Hospital. 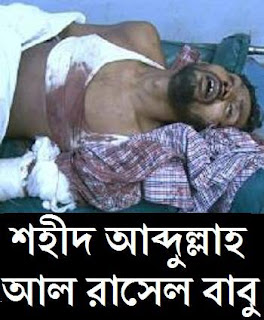 Rasel was known to his close friends and family by his short name Babu. He had come home during the Eid holidays to celebrate the occasion with his parents. He is son of Nurul Alam of North Sedai in Boro Darogarhaat of Sitakundu in Chittagong. Rasel was well known in his student days as a very devoted Shibir activist and had only recently joined Jamaat.
As news of Rasel’s murder spread, agitated activists of Jamaat and Shibir poured out onto the streets and blocked the Dhaka Chittagong Highway in protest. They blocked the highway and took out demonstrations at various points including Sitakundu Sadar, Barobkundu and Kumira areas.
When police arrived at the scene to forcefully disperse the protesters, clashes ensued. Police, in a bid to control the situation, fired rubber bullets and live bullets at the protesters. In the mayhem that ensued, several vehicles were vandalized and protesters set fire to some of them.  Two Jamaat activists were seriously wounded by bullets along with as many as 10 people injured, a police SI amongst them.
Bullet ridden Jamaat activist Abu Bakr Parvez (32), died on his way to the hospital. Doctors pronounced him dead on arrival.
On Thursday the 8th of August, thousands of people attended the Namaaz-e-janaza of the two slain Jamaat activists held at 3 pm in the afternoon in front of the L.K. Siddiqui square at Sitakundu sadar. As naseeb (fate) would have had it, it was known from personal sources that brother Parvez's son was born on the 8th of August, the very next day after his Shahadat. 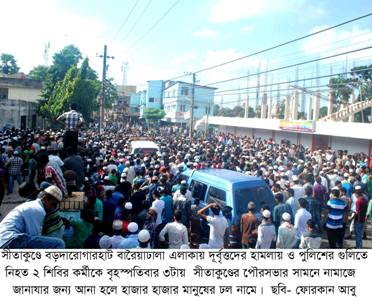 As the nation suffers from a terrible bout of lawlessness under the auspices of the Awami League government led by its very own killer squads headed by its youth fronts, the Chatra League and the Jubo League, the nation wonders as to how long it is before murder of innocent people and political activists at the hands of such killer squads sees the light of justice. The killing of Jamaat activist Rasel and his subsequent barbaric tendon amputation point to a vicious practice that the Chatra League have long tended to in carrying out political killings and blaming them on others.
I call for justice NOW in the light of such despicable acts of murder carried out in broad daylight and sanctioned by the state.
May Allah reward the Shuhada who laid their lives for the cause of establishing justice. Please pray for them and their families.
Inna lillahi wa inna ilaihi raajioon.
33372 views 0 comments