In Bangladesh, it’s a greater crime to speak out against the family of the ruling party Prime Minister Sheikh Hasina than to blaspheme against Prophet Mohammad (SAW). Shocking as it sounds, events throughout the past few years bear witness to that. The most recent event is as follows,

Judging an obscure remark Vs a seasoned Islamophobic icon,


On the 23rd of April 2012, a general diary was filed with Shabagh police station, against a teacher of Bangladesh University of Engineering and Technology alleging that he was a threat to security of prime minister Sheikh Hasina. Jananetri Parishad president AB Siddique had filed the diary alleging that BUET mechanical engineering department lecturer Hafizur Rahman Rana had posted libelous remarks on the facebook against Hasina. While filing GD number 1403, AB Siddique enclosed the remarks posted on the facebook post and a report on it published by Bangla daily ‘Bhorer Alo’ on April 19 with his allegations.

The facebook remarks state ‘Tui Hayena, Tui BUET ke khabi? Parbi na. Prothome desh ke, akhon BUET ke……..Matha kete BUET gate a Jhulia rakhbo jate ar kono hayne akraman na kore.’  / (You hyena, you will consume BUET? You shall not be able to. First the country, then BUET........ I shall cut off your head and hang it on the gate of BUET so that NO more hyenas can attack us anymore)

These were the comments that got him 7 years rigorous imprisonment in jail. AB Siddique said that he felt that the comment was aimed at PM Sheikh Hasina, while BUET lecturer Rana had explained that the ‘hyena’ he had alluded to was ‘corruption and irregularities’. Despite the flimsy basis for a case, Dhaka Senior Special Judge Md. Jahrul Haque delivered the verdict Thursday, 27th of June, in absence of Hafizur Rahman who went into hiding after being granted a bail from the High Court on August 14. Later he also got bail from CMM court on September 18. The court sentenced him five-year jail term under section 57 of Information and Communication Technology Act and two year under section 506 of penal code.

The same court and the same Judge, Md. Jahrul Haque, on the very same day, granted bail to widely known  Islamophobic atheist blogger Asif Mohiuddin who was detained in April this year in connection with a case filed against him for violating information, communication and technology laws on charges of producing blasphemous write-ups on blogs and social media. Earlier on June 2, the same court granted bail to three other bloggers Mashiur Rahman Biplob, Russel Pervez and Subrata Adhikari Shuvo in a non-First Information Report (FIR) case filed under the Section 57(2) of Information Communication Technology Act 2006.

Such contrasting judgements by the same judge based on the same law ( 7 years for a libelous remark that could mean anything; bail for a widely known blasphemous Islamophobic blogger) allude to a politicized judicial system that caters to the whims of a particular political segment. Shockingly, it seems to be a greater crime to speak out against the family of the ruling party Prime Minister Sheikh Hasina than to blaspheme against Prophet Mohammad (SAW). 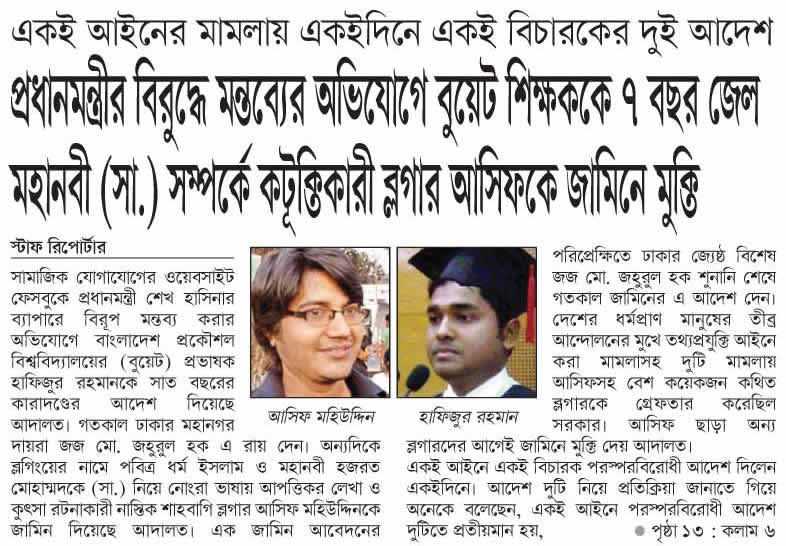 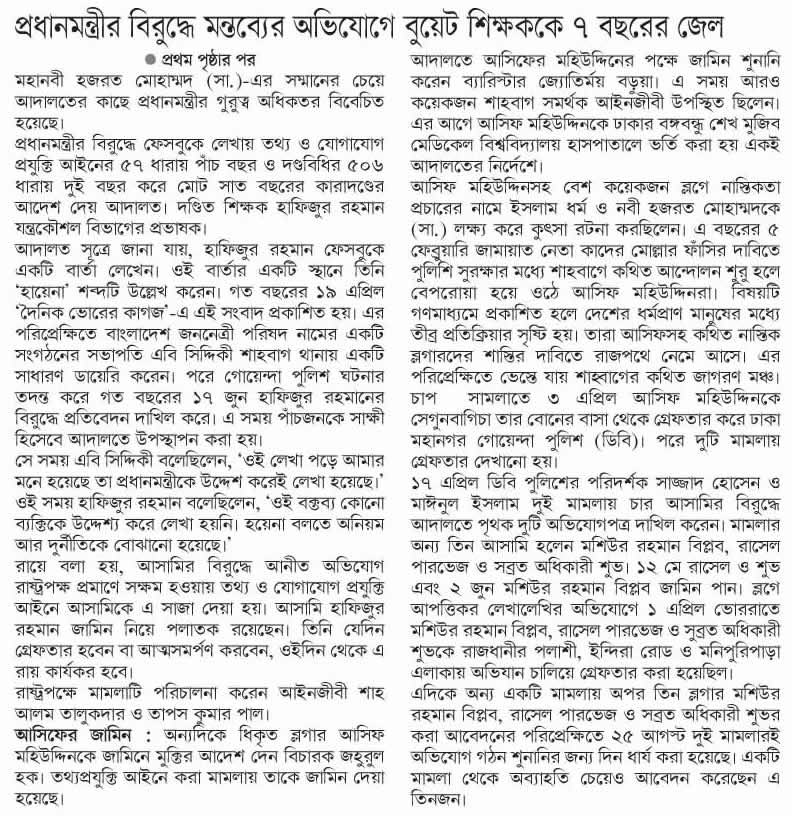 Imams in jail for ‘slandering’ PM’s family,
The police on Saturday, the 8th of July, arrested two Imams at Boalmari upazila in Faridpur for distributing leaflets containing ‘offensive’ remarks against the prime minister, Sheikh Hasina, and Sheikh Mujibur Rahman’s family. Officer-in-charge of the Boalmari police station Ruhul Amin said that the two imams were Maulana Abul Hasan, 52 , an Imam of Boalmari Central Jame Mosque, and Rabiul Islam, 32, an Imam of Gunbaha-Taltala Jame Mosque. He said that they distributed leaflets, containing ‘derogatory’ comments against the prime minister and Mujib’s family, among the devotees after the Jumma prayers on Friday. Police Superintendent Hashemuzzaman filed a case against them under the Special Powers Act. On Sunday, the imams were sent to court, where the police asked for 5 days in remand for their ‘crime’. They were subsequently sent to jail. On Thursday the 20th of July, hartal/general strike was observed at Boalmari by the local branch of opposition BNP asking for their unconditional release.
Not an isolated incident,
This is not isolated. Criticism against Hasina and her family in the past has been met with uncharacteristic swift action, both by the law and the administration. On January 4th 2012, a university lecturer, who posted a Facebook status wishing for the death of Prime Minister Sheikh Hasina, was sentenced to six-month in jail by a Bangladeshi court. In 2009, Information Secretary ATM Fazlul Karim alias Abu Karim was forced to resign and was arrested after a plethora of cases were filed against him for allegedly undermining Bangabandhu Sheikh Mujibur Rahman and his family members in one of his poems. Some more cases are given here. These are high profile cases which gleaned international media attention and are the tip of a phenomenon that is sparsely documented in Bangladesh. It is mentionable that youtube and facebook have been blocked for various periods in Bangladesh just to suppress such phenomena, especially after public outrage against the ruling party following major events like the BDR mutiny and the spread of video and audio detailing recent atrocities of the government.
Meanwhile……
The government of Sheikh Hasina has never backtracked from any opportunity to declare its love for protection of Islam and Islamic ideals. To this effect, the use of the law has been exemplary. But it was all for the wrong reasons. The actions of her government have proven to be exactly the opposite of her words.
Some examples,
Take the example of the dismissal of a defamation case hours after a lawyer filed it against Prime Minister Sheikh Hasina's Adviser HT Imam and three others for hurting religious sentiment of the Muslims. In his complaint, the lawyer mentioned that HT Imam, while addressing a conference titled 'Islamer Dristitey Juddhaparadhider Bichar' organised by Awami Ulema League as the chief guest at Diploma Engineers' Institution auditorium in the city on April 2, said Islam had been protected in Bangladesh by Awami League and Bangabandhu Sheikh Mujibur Rahman was its initiator. Metropolitan Magistrate Mustafa Shahriar Khan dismissed the case saying, "The case was dismissed as there were no elements of defamation or hurting religious sentiment of the Muslims."
All seems well and good in line unless one considers the fact that the same judicial system facilitated the arrest of three leaders of the country's largest Islamic party, Jamaat-e-Islami, on charges of "offending religious sentiments" in 2010. The three were accused of making comments comparing the party's chief to the prophet Muhammad. The charges stemmed from claims that Nizami's alleged persecution at the hands of the ruling Awami League was akin to the suffering of the Prophet Mohammed, which was a ridiculously frivolous charge to excuse their arrest. The main reason was, as the world saw later, to arrest them in preparation for a controversial war crimes trial that was to drag on for years.
Some of the case dismissals on the grounds of selective ‘frivolous’ charges of hurting religious sentiment include some Islamophobic bloggers from Shahbag. After a court dismissed a case against 8 bloggers for hurting religious sentiment and Islam defamation at Chittagong on the 6th of March, another court at Barisal didthe same on the 27th of March.
In an effort to appease angry crowds who had reacted negatively to the above dismissals, the government arrested 4 bloggers by the 4th of April ahead of the long march programme of Hefazat-e-Islam on the 6th of April. The catch was that the government subsequently arrested the editor of opposition supportive news daily Daily Amardesh, Mahmudur Rahman, who had helped expose the above bloggers, on similar charges. A result was that Amardesh was subsequently banned from publishing amid much drama. Three of the four bloggers have been released on bail till date, while Mahmudur Rahman still is in custody, with no end to his ordeal in sight and Amardesh hasn’t been able to publish till date. In retrospect, it seemed that graver were the crimes of the one to expose, not the exposed.
In conclusion,
Such are the high handed practices of the current government led by Sheikh Hasina. With such selective judicial norms in place supplementing the heavy handedness of the government in suppressing the opposition, it is no wonder that a tsunami of disapproval and unpopularity has been unleashed, which most recently manifested itself in the form a crushing defeat for the Awami League in the four city corporations polls held past week.

Time will eventually tell. However, for now, it seems after all, that blatant oppression in the name of justice won’t pay, be it the daughter of the Father of the Nation herself.