The Fatikchhari saga and the myth of loudspeakers

The Fatikchori saga talks volumes. More than 5,000 people were accused on the 12th of April in a case filed for attacking law enforcers and obstructing their work during the fight. Of the accused, 100 were named. Three ruling Awami League men were killed and scores injured when locals gathered and attacked an anti-hartal procession of AL and Chhatra League at Kazirhat in Bhujpur. 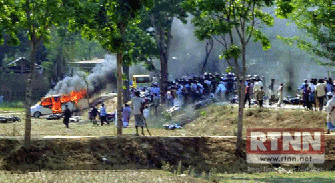 More than 200 vehicles including motorcycles, jeeps, pick-ups, a police van and a fire truck were torched. Besides, some 20 shops were set ablaze during the mayhem. Daily Star has claimed that witnesses and local administration sources said at least 15 policemen, four firefighters, and two BGB men, were among the injured. Of the injured, some 47 people were undergoing treatment at Chittagong Medical College Hospital.
Earlier, on the 11th of April, ATM Peyarul Islam, AL leader and ex-chairman of Fatikchhari upazila, lead a motor procession at around 8 am, protesting Thursday’s nationwide shutdown called and enforced by Shibir demanding release of its president along with all leaders. Clashes broke between the pro and anti strike supporters as the procession reached Kazirhat around 11:30am. Witnesses say that the League started taunting bearded men with caps as Jamaat activists and started throwing bricks and stones at the Kazirhaat madrassah which they labelled as a Jamaat enclave. Several hundred locals of Kazirhat, students of Kazirhat madrasa and pro-hartal activists got involved in the clashes. Things got heated following announcements by the opposition members over loudspeakers from Kazirhat Bazar Jame Mosque explaining the situation.
The Awami League members then retreated backwards instead of going forward as planned. As they retreated to Kalayertek, enraged general people (about 400 people) encircled them and started attacking them with big sticks. Almost all the vehicles and motorbikes were burned.

At about 2 pm, members of the fire service, BGB and police tried to extract AL leader ATM Peyarul Islam and ex Chatro league leader Abu Tayeb along with other AL activists from the hands of the people, but with little success. Unsuccessful, they then started firing on the demonstrating people in order to disperse them. In the unrest that ensured, two Chatra League members were brutally beaten to death by the locals. Another Shechha Shebok League member died from his injuries at hospital. Many League supporters suffered injured from the public beating. More than 50 people suffered bullet injuries.
Later, calm was restored after 3 pm when the local upazila Chairman Shafiul Alam Nuri and Kazirhaat Boro Madrassah principal Mawlana Junaid Bin Jalal appealed for calmness through announcements through the masjid loudspeakers.
Police picked up 44 people on Thursday night including local Jamaat leader and Bhujpur union chairman Shafiul Alam Nuri, one of the 100 named accused in the case filed by police yesterday.
What does the whole saga portend for the future of the country? It is clear that the involvement of the general people cannot be belittled. The people have time and again, over the past few weeks, shown their displeasure against the government, and the government tactic of blaming Jamaat, Shibir and BNP for the violence clearly has had no effect. The people seem to have a voice of their own. A cycle has been initiated which has seen almost all of the Jamaat, Shibir and BNP leadership detained. The arrest of Mahmudur Rahman has certainly not helped and increasing the dose of repression to oppress the political and religious opposition has only lead to further inflammation. A perfect example was the Hefazat-e-Islam rally on the 6th of April. Calls by shortsighted Shahbag activists such as to demand strict regulations on using the masjid mike and loudspeakers is guaranteed to only make the situation worse.
The people have said no to more oppression. Its time the government rethink its failed strategy and sit with all political parties to prevent further breakdown of the situation of law and order along with the immediate release all political leaders from prison. Barring that, a dark future for this country is all that seems to loom.