A call to free the Shibir President Delwar Hossain

The 11th of April, saw the enforcement of a dawn to dusk hartal/strike called by the largest student organization in Bangladesh, Bangladesh Islami Chatra Shibir. The student body called the strike to protest the arrest of its central president, Delwar Hossain, and police torture carried out upon him in the name of remand. A Shibir leader was shot dead and six others, including two  policemen, were injured as police opened fire at the procession brought by Shibir during hartal at Chenchuri in Dumuria upazila on Thursday morning. The deceased was Mansoor Ali Gazi, 23, a Shibir district unit leader.
Earlier, Delwar Hossain was arrested on the 31st of March by security forces from the capital's Shyamoli from his sister's house by security forces. The student community rose in protest that day and Bangladesh Islami Chatra Shibir issued an ultimatum of 24 hours for his release, calling for demos on the 1st of April and tougher programmes if he was not released within 24 hours. Ignoring all demands for his release, the police state adorned the beloved leader of thousands as a condemned criminal and brought him to the court in handcuffs. A true leader, Delwar Hossain smiled at their audacity and instead strived to maintain his dignified posture to assure the hundreds of thousands of crying hearts that he was alive and well with the grace of the Almighty. 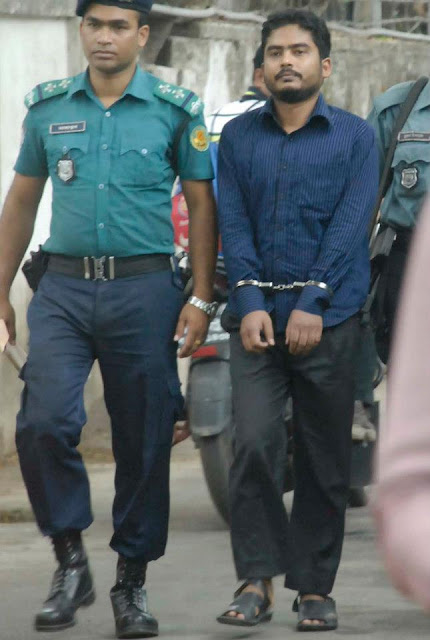 On that day he was granted 14 days remand for alleged involvement in assaulting police and blasting cocktails on Mirpur Road in the capital on February 28. After the countrywide shutdown (hartal) on February 28, two cases were filed with Mohammadpur Police Station for assaulting police and blasting cocktails in front of Care Hospital on Mirpur Road. Metropolitan Magistrate Harun-or-Rashid granted the remand order when police sought a 20-day remand in both of the cases. The Shibir chief was granted 14 days remand in the two cases on Monday even though he wasn't named in the charge sheets of either case. The lawyer of the defendant said that this was a political conspiracy since 10 accused who were actually listed in the cases on the 16th of March including Mostafa Kamal had been granted 2 days of remand against a prayer of 7 days while an unnamed defendant like the Shibir President was granted 14 days against the police prayer of 20 days.
Protesting the government injustice and demanding the immediate release its president including all unjustly detained members, Shibir called for a nationwide strike on the 2nd of April. The 18 party grand Alliance supported the call and called for the same to press home their own demands. The 2nd of April saw justifiably livid outbursts from the students in demanding the release of their leader. More than 200 were arrested, 300 injured and 11 injured from police firing on that day. The government, in its political shortsightedness and unending greed to hold on to power through crackdown on political opposition, remained deaf and mute on the matter.
Strikes were called subsequently for the 3rd of April at Rajshahi and Rangpur to protest the arrest of the Shibir President. It is mentionable that special care was taken to exclude all examinations of HSC and Alim level.
On the 7th of April, 8 student organizations issued a statement calling for the immediate release of the Shibir President and denounced torture inflicted on him in the name of police custody. According to the english website of Shibir, " In a joint statement, Jagpa Chhatra League President Saiful Islam, Khelafat Chhatra Andolon President Sultan Muhiuddin, Khelafat Chhatra Islami Bangladesh President Anowarul Hoque Imran, Jatiya Chhatra Dal President S.N. Shaon Sadeqi, Islami Chhatra Somaj President Ilias Athari, Labor Party President Kamrul Islam Suruj, Chhatra Kalyan Party President Jamaluddin and Muslim Chhatra League President H.M. Khan Asad said, “The student segment is now roaring in protest against governmental actions fatal to the country and Islam. The seat of the government is shaken enough by the tougher movement of the students. This is why it is persecuting Shibir Central President, a Top Leader of Chhatra Oikyo, in the name of remand by unjustly nabbing. The student section shall never tolerate such persecution on him. The government has surely to suffer a lot if any harm is inflicted upon him even to the lowest extent. The student segment will be bound to announce one-point ‘oust the government’ agendum” The student leaders urged the government authority to stop persecuting Shibir President and set him free unconditionally. "
On the 8th of April, the mother of the Shibir President, along with the lawyers of the defendant, arranged a press conference at Court Street in Old Dhaka to protest what she said was inhuman torture being inflicted on her son and demanded for his immediate release. 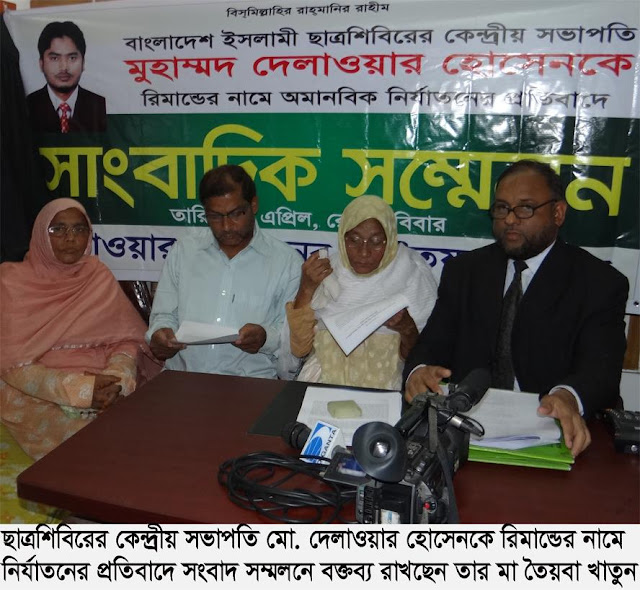 Tearful mother Taiba Khatun said that when she contacted Mohammadpur police station to enquire about her son, they replied that they did not know of any Delwar. She got the same response from the Detective Branch of police who did not heed to her enquiries. Enquiries through lawyers had also been futile and unsuccessful. This had forced her to call for the press conference. She also enquired as to the motives of the government in arresting her pious son who she believed was a victim due to his opposition to government oppression and crackdown on the political opposition. She further iterated that she had gained knowledge from a trusted source that her son had been inhumanely tortured in police detention to a level that he had been unconscious for days at an end and that his life was in danger as a result. She demanded that the government immediately release her son back to her.
On the 9th of April, Shibir released a statement that denounced the inhuman torture on its president and demanded for his immediate release. Hartal/strike was called for Thursday the 11th of April to protest the above.
It is a matter of great alarm that the government has ignored all peaceful calls by the student body, and has instead concentrated on further inflamming the situation by carrying out torture of Delwar Hossain and preventing his lawyers and family from meeting with him.
I close this post by strongly demanding that the government release all political prisoners in Bangladesh including the Shibir President and all illegally detained Shibir members and associates. Its time to stop the madness.